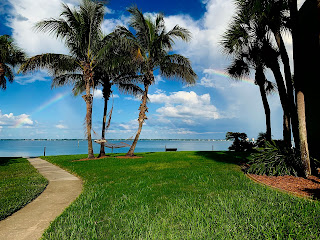 The raw and sometimes spooky detail attaching a family is discernible to outsiders after quite moderate exposure, allowing for an expiry of the polite niceties and a revival of the more visceral ingredients. The disclosure is accelerated by the comparative lack of generosity which frequently thrives among related persons who themselves have long ago by-passed the extravagance of pretence in favour of what are the more hardened realities of society.

I mention this because even within the charmed and elevated ambience of Longboat Key (one of Florida’s tiny barrier islands which is basically a gated residential community for the well-to-do) the declension into third world inadequacy is not always hidden far below the veneer. On a strictly matter-of-fact level for example we have today encountered a prolonged collapse of internet connection. This abuse of modern technology is most often associated with remote districts of civilization. Meanwhile here within this cultivated seat of opulence and privilege saturated blondes parade about in shiny white Bentley automobiles. Yet the sea-level inhabitants silently struggle for the most fundamental infrastructure of modern society - distortions which frequently affect both internet and cellular telephone services.

Interestingly the accommodation of the discomfort heightens the sense of primitive bearing associated with the outer Pacific islands. It is not however a welcome conflict when one wishes to communicate by email or to troll the internet for banking, literary or investigative purposes. Those of us who have embraced the technological evolution have in the process adapted to new ways of doing things - which don’t for example include handwritten letters, scribbled diaries or hardcopy brochures in car dealerships.

The good news is that the complication is rampant among many of the other people directly or indirectly involved with the commercial and personal enterprises of the island. The intolerance is reportedly universal. We are as a result not merely obsessive whiners in this particular context. Likewise proceedings are already underway to correct the problem - though astonishingly not without the appearance of southern abeyance.

The subtropical allusion is not entirely without merit other than as a metaphorical slur. Being surrounded by scampering geckos, lush palmetto ferns and towering palms, majestic sailing flamingos and chirping small birds with vermillion coloured heads, mounting volumes of white clouds against a backdrop of azure, vast plates of sea and bays, manicured lawns and yachts bopping in the inlets - these picturesque images inspire rhapsodic expression. While leisurely swimming on my own in the pool this afternoon my imagination awoke to a smug contentment. There is an uncommon relief which attends the brief adjustment to a new environment. It is a waveless submission to an extraordinary situation, partly familiar, renewing pleasantness, the prospect of unbroken sunshine and bicycling along smooth, flat pathways.

We have as well addressed certain lingering differences and in the process have successfully withdrawn from erstwhile brooding. Dealing with life’s challenges is from time to time not without its collateral rewards. How quickly we reduce ourselves to the intimacies of personality and humanity! The distinction between that and worlds beyond is perhaps truly one without a difference. And then there are the no-see-ums which have unambiguously reminded me of other undesirable subtropical inhabitants. The Benadryl remedy is speedier than Comcast.
Posted by L. G. William Chapman, B.A., LL.B.