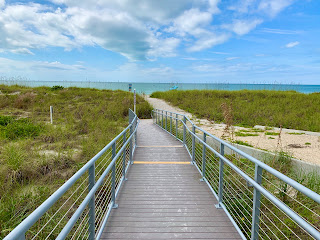 In the middle of the night I strayed from my virginal lair and stole silently into the drawing room to look out the patio windows. The lights glimmered across Sarasota Bay and along the nearby boat slip. The midnight blue was calm and restful.  I ended making a coffee and puttering on my computer for an hour before returning to bed where I slept deeply and dreamlessly until mid-morning.

We recently arrived at our apartment on Longboat Key. For the past several days I have been unpacking my suitcases and slowly completing the transition of clothes, bathroom articles and accessories to drawers. The alignment is now complete. This afforded a springboard for activity.  For the first time in months there was nothing of a business nature on my diary commanding attention. Accordingly I spent the remainder of the afternoon cycling to Bayfront Park then swimming in the pool. The weather has been hot and clear. My limpid indulgences seem positively wasteful! Nor is my curiosity limited to anything more distracting than the type of oranges I intend to purchase, the date of our manicure and pedicure, getting the car detailed and snapping photos and editing them.

Several years ago when I first saw Longboat Key the impact was instantly magnetic. Then the perception modified in the customary way; namely, familiarity partially replaced the former prepossessing nature. Nonetheless the place has preserved its undeniable attraction. The only disturbances have been reworking the internet service in the apartment, connecting the scanner to the computer and dealing with our bank regarding a compromised credit card. Were it not for these contaminating realities our situation here is divine.

In my reflective moments I ponder my past, present and future.  This may resound of useless introversion but for me it pointedly follows upon the first anniversary of my mother’s death. I haven’t any regret for her loss. She lived a long and full life and only declined irretrievably within the last month of her life. Yet her death signifies for me a significant alteration of my history. Her departure and the death of my father three years previously crystallizes my entire independence.  Though I never thought of myself as a particularly caring child I clearly included them in the account of my life.  Whenever there was something I felt worth reporting, it was with them that I first communicated. Their approbation was important to me.  Now that things have changed I obviously no longer feel the necessity to participate in that particular dialogue.  In a very small way the death of my parents shifts the responsibility of family to my shoulders. This is probably a consequence of little more than being the first born.  I do however consider it vital to keep in touch with my sister and only sibling, including a preservation of acquaintance with the affairs of her husband and my two nieces.

When I have exhausted these modest familial duties I decline into an obsessive review of matters affecting me personally. Many of these trifling considerations are shamelessly materialistic, a rapid but eagle-eyed assessment of my current living conditions, clothing, jewellery, motor vehicle and latest medical undertakings.  This contemplation brings me nowhere near a review of spiritual or intellectual traits. Surveying those defeats, accomplishments and acquisitions is perhaps best reserved to others if indeed they are of any interest whatsoever.  I am satisfied that I have led a diligent and sometimes curious life; and, more accurately, that I wouldn’t change a scrap of my currency for anyone or anything. This to me is not vulgar smugness but rather an acceptance of the truth that I am stuck with this carcass, its contents and its affiliations of whatever nature and with whomever they may prevail. Perhaps a better rendition of the condition is complacency, less a matter of pride and more a statement of contentment.

Being in a state of satisfaction and happiness definitely denotes payment of a claim, one which is frequently associated by no accident with simplicity.  I view the simple life not sarcastically as Oscar Wilde might have done (“My tastes are simple: I like only the best”) but rather as a reduction of life’s complications to what are often the unfeigned elements of living. This conceptual process has for me the relieving effect of eliminating all but the most critical features. Having devoted over forty-five years of my life to unqualified detail - and though I continue to appreciate the necessity and advantage of doing so - it is beyond helpful that I haven’t any longer to endure a spanner in the works. Though I was never one to side-step complexities or obstacles I welcome the more tranquil opportunity to compete with life’s daily hurdles. This enervation is recognizably a product of advancing age, something I can neither dispute nor alter.

There is considerable satisfaction in the appreciation of life as it comes and goes, much in the same manner as the tides ebb and flow.  While seemingly nothing is static we are nonetheless assured of both the ups and downs of existence, a frank confession which on the one hand is hardly optimistic but which on the other hand is mollifying in an odd manner. I would however add that I do not view this characteristic as inviting fateful submission; rather as stimulating the unpredictable consequence of the moment.

Whatever the import of this rambling philosophic blathering, the plain extrapolation is that for the time being we find ourselves in very palatable circumstances. I am now in the position of celebrating the accomplishments of the past six months on terra firma where we succeeded to overcome the previously annoying ailments of head to toe (hearing aids, eye surgery, dental surgery, inguinal surgery and neuropathy).  I won't say that it was all a total refreshment but at least progress was made in every direction; one must admit that an old car can be refurbished only to a point.
Posted by L. G. William Chapman, B.A., LL.B.