My baptism is complete! 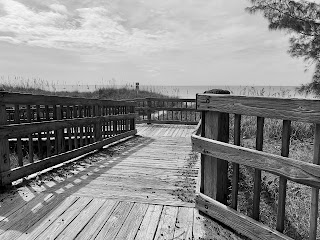 Our residence this year on Longboat Key is adjacent Sarasota Bay rather than the Gulf of Mexico. Longboat key is such a narrow barrier island that we are literally just steps from either the Bay or the Gulf; however because I have such an adversity to walking (a disinclination presently aggravated by neuropathy but reflective of what has been a lifelong prejudice) it has until now presented a moderate obstacle to my investigation of the sea. This is a barrier for me as I have always equated the sea with singular charm and magnetism surpassing even the most enchanting lake or river.  Like many others I lapse into uncontrolled imagination upon the mere thought of sailing ships, seaside surf and sandy beaches.  The narcotic constitutes an abuse if ignored.

This morning as I rode along my customary route to Bayfront Park I could no longer resist taking a closer look at the Gulf of Mexico which was no more than 50 yards away on the other side of the road. I parked my bike along the fence then walked down the sandy path to the the sea. Initially I had no more ambition than to sit upon the beach and watch the Gulf of Mexico and the few people who were walking along the shore. It wasn't long however before I was consumed by the allure of the sea. I removed my boat shoes, cotton top, Apple watch and hearing aid and stuffed the smaller items into my empty shoes then covered them with my top and slowly headed to the sea.

The instant I entered the water my relief was immediate! The warm soft water was heavenly! I wasted no time submersing myself totally, relishing the mild taste of salt on my lips and enjoying the sight and feel of the white sandy bottom. As mad as it resounds I have often thought of myself as amphibious given my inherent compatibility with the sea.


As a matter of record only, I am now sitting on a lovely park bench adjacent Sarasota Bay, attempting to dry my cotton shorts before re-uniting with my bicycle on the ride home. Everything contained in this current narrative is being dictated to my iPhone through Siri.  This technical miracle overcomes the restrictions of reading glasses and typing facility.

It qualifies as a proper indulgence of youthfulness to be covered with tiny grains of sand from the beach, wearing dampened clothes from the sea, rejoicing in the drying wind and brilliant sunshine. I have naturally reconfigured my future costume for bicycling to include a Speedo bathing suit which will hopefully allow an easier performance when withdrawing from the sea. Though I hadn’t showered and shaved this morning before starting my bicycle ride I now feel completely refreshed and renewed notwithstanding the bristles on my face. Today - the autumnal daylight savings - is a Sunday.  Earlier this morning while munching a sliced Granny apple, sipping my black coffee and slurping steel cut oats I read with interest the initial argument in Paine's thinly disguised attack upon organized religion.  His thesis while compelling relies upon an inarguable proclamation of the wonder of life. It was this tocsin which animated me today.


"But if objects for gratitude and admiration are our desire, do they not present themselves every hour to our eyes? Do we not see a fair creation prepared to receive us the instant we were born — a world furnished to our hands that cost us nothing? Is it we that light up the sun; that pour down the rain; and fill the earth with abundance? Whether we sleep or wake, the vast machinery of the universe still goes on."

Excerpt From: Thomas Paine. “The age of reason: being an investigation of true and fabulous theology”

I had been previously concerned that I would be unable to swim along the shore as I have customarily done in the past. I discovered this morning as I simply paddled along the immediate shore that there is no necessity to go farther. It is satisfying merely to relish the taste and feel of the sea and the sight of the sandy bottom.  This is another corollary of aging; but I delight in having surmounted the disadvantage.

Coincidentally when I began cycling this morning along the Gulf of Mexico Drive I pondered some vivid elements of my youth and the perception of what obfuscation awaits me in old age. Having accomplished this minor adventure this morning renews my spirit and my physical energy.  It is an incredible privilege to watch either Sarasota Bay or the Gulf of Mexico, the diving birds, listen to the squawking cranes, and know that all of it is accessible in an instant. I am bound to mention that the elevation of swimming in the sea provided much needed relief for my strained back and leg muscles. I have more importantly completed my alignment with this extraordinary place!
Posted by L. G. William Chapman, B.A., LL.B.