No more than a whimsy 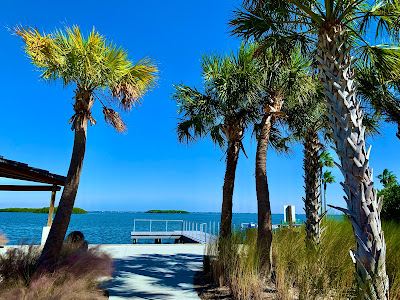 The condition precedent to today's morning animation entailed as it customarily does on the heels of a cup of strong black coffee, sliced green Granny apple, a wedge of Brie cheese and a bowl of steel cut oats a bicycle ride along Gulf of Mexico Drive to Bayfront Park. It is a jaunt which thanks to Mr. Apple's watch I can report with authority was a total of 15.92 kms.  While at the Park I lingered upon the bench overlooking Sarasota Bay. During my respite I met Lincoln a tiny and exceedingly friendly Havanese, the national dog of Cuba developed from the now extinct Blanquito de la Habana (itself descended from the also now extinct Bichón Tenerife, a cross-breed with the Bichon types including the Poodle). 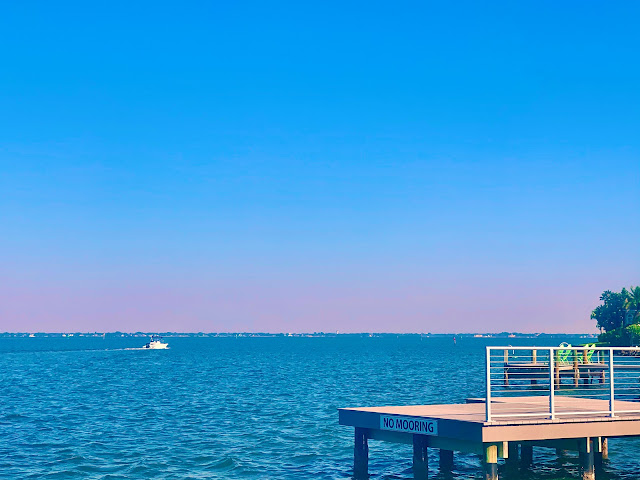 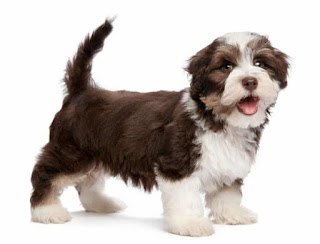 Lincoln, so I was told by his Canadian mistress (who hailed from nearby Toronto) preferred the company of humans to that of other dogs.  I willingly reported that I reciprocate the compliment. Though of course I did not know it at the time, the little dog's comical activity was a serendipitous introduction to what was to follow. 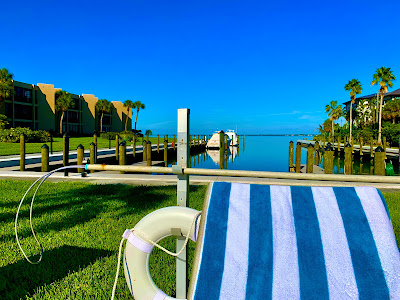 Upon my return to the condominium I was anxious to soak up the stunning sunshine from the azure sky. This in spite of the intoxicating allure of the on-going impeachment proceedings which had accelerated upon the damning testimony of Dr. Fiona Hill. But even the glamour of the Flavian Amphitheater with its gladiatorial combats and wild animal fights were - pardon the pun - trumped by  the divine weather and the irresistible temptation of the swimming pool. I had judiciously decided to avoid the Gulf of Mexico because I am just now recovering from the advances of no-see-ums which I credit a spinoff of the sandy beach.

Playful behaviour I think correctly captures the poolside antics today.  My new acquaintance from Boston was in league with me not long after my own arrival by the pool.  Following a polite exchange of social niceties we quickly descended into our common hobby of storytelling and humour. It is unnecessary to recount the pleasantries which followed but sufficient to say the time passed quickly and it was only after the exhaustion of our droll sparring match that we restored ourselves to our respective chaises longues, I to absorb the sun, he to do the New York Times crossword puzzle (a manifest strength in my opinion).

In the context of the most whimsical conversation there is to the eager mind fodder for serious contemplation. My friend said with marked humility that he hadn't succeeded to especial pinnacles in his erstwhile professions (which importantly to me include writing and film). Maintaining as I do the philosophy that modesty is a hint of far greater achievement I calculated his comments to be worthy of enlargement.  I also disclosed to him my discovery of his curriculum vitae on the internet through Wikipedia. This too he diminished as insignificant and even proffered a plausible account of its unpretentious evolution.

What intrigued me in particular was the related view which unfolded in the description of those who have risen to acclamation. The thrust wasn't that others have been successful but that those who have been successful often suffer the same human despondency which any of us does. As a lawyer and student of philosophy (in particular deductive reasoning) I flatter myself to acknowledge without hesitation that commonality of humanity (whatever its expression) is axiomatic. I accounted for example that the two suicides with which I am familiar were by those whom one would least expect to endure the prejudice.  In a broader perspective my friend and I shared the conclusion that no one is spared the challenge of living. While this is hardly insightful it nonetheless bears repetition that no amount of money, prestige, position or ancestry will succeed to eliminate the identical human conflicts we are all bound to address.

Lest this colloquy devolves into an entire evaporation of gusto I am anxious to record the favourable peroration of our foregathering. When one gets close to the weakness of humanity it constitutes a blunt but percipient connection. Stepping back permits recovery and stability.  Humour is a valid resource. 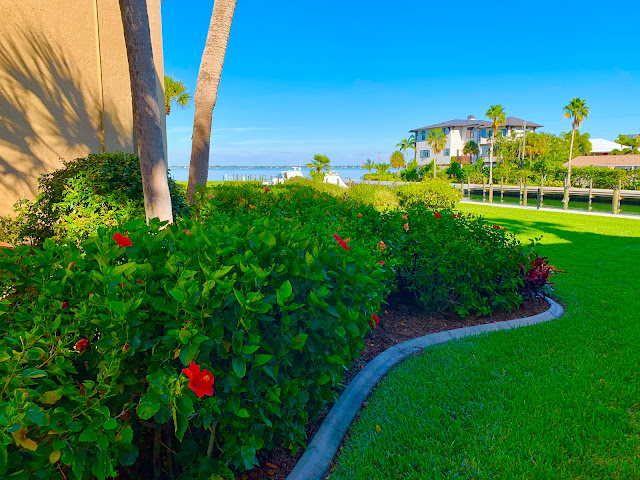