The King has no clothes! 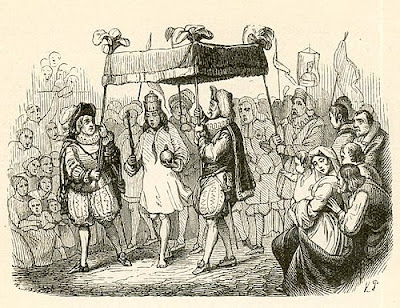 Even without knowing the outcome of either the Congressional impeachment of the President of the United States or the deciding vote of the Republican controlled Senate, Trump has already suffered the superlative indignity. This is a collective, predictable and irreversible assault upon his fantasy-book march to monarchy.  He has had to endure the iconic demeaning constitutional ritual equating him with other discredited low-level or lascivious figures - a far cry from the royalty he has so frantically sought and mimicked. His impeachment (the 4th in American history) is certain to remain his sole and defining characteristic, an abrupt and distasteful compendium of his already notorious pattern of misbehaviour. Whatever else is said about Trump either now or in the future will rapidly dissolve to this public and political embarrassment.

As in Hans Christian Anderson's tale about the vain emperor, the delineating moment in the charade arises upon the assertion of an unpretentious child who merely states the facts.  After the child blurts out that the emperor is wearing nothing at all the cry is then taken up by others.  It is likewise significant that even when the emperor realizes the assertion is true he continues his procession.

The story is as much a ridicule of the bourgeoisie who were willing to engage in hypocrisy, snobbery and intellectual vanity. As importantly the metaphor highlights collective denial and hollow ostentation. For this reason those who persist in denying the reality will themselves pay a similar price.

Challenging the accepted prestige of the US Presidency is clearly not for the pusillanimous.  Nonetheless the authenticity of the impeachment reveals its sting in spite of the cloak and mantle of the office. It also has to be acknowledged that other people stand to lose their job as a corollary of these proceedings. It is a human consequence which cannot be ignored, another blatant truth.

The division between Democrats and Republicans is so entrenched that most members have already made up their minds without hearing the evidence. This polarity serves only to perpetuate the cat fight. Histrionics appear to be the primary theme on both sides. Small wonder the average viewer will quickly descend into disparagement about the utility of the entire process. Moral conviction has - once again some would argue - taken a back seat to dramatics. Maybe it's all just another fable!
Posted by L. G. William Chapman, B.A., LL.B.